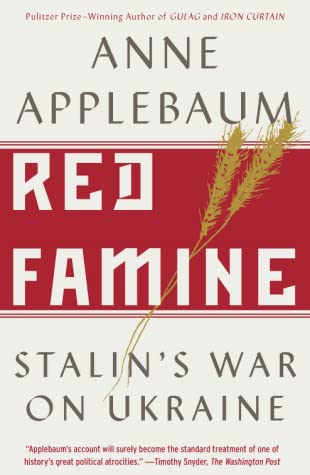 The period presented in this work focuses on the systematic starvation of the country of Ukraine at the hands of Stalin and the Soviet Union between the years 1932 and 1933, in which roughly four million Ukrainian men, women, and children were killed by means of starvation.

When Stalin first came to power, the people of Ukraine had a very strong sense of national pride, many considered themselves Ukrainian first, rather than Russian, or members of the Soviet Union. Almost immediately, Stalin began fearing a nationalist Ukrainian revolution that could ultimately end in the shattering of Soviet ideology, and so a ruthless Soviet purge of Ukrainian intellectuals and religious leaders began. Many Ukrainian leaders and intellectuals wanted to elevate Ukrainian to the status of the national language, replacing Russian in that category. Schools and churches began using Ukrainian rather than Russian, which Stalin saw as another step toward a Ukrainian nationalist revolution and in turn, his own loss of control of Ukrainian land, and agricultural exports.

Ukraine holds claim to some of the world’s most fertile soil, and has in that light gained the rights to the title “The Breadbasket of Europe.” Because of their climate and soil, Ukraine can manage two crop harvests a year, both a ‘winter’ and a ‘spring’ wheat. This was one particular aspect that drew Stalin to Ukraine. Stalin wanted to drastically increase the industrialization and agricultural production of the Soviet Union, creating a five-year plan to accomplish his goals. In order to realistically accomplish the Soviet plan of industrialization, Stalin had to greatly increase the Soviet Union’s grain exports coming out of Ukraine to sell to not only other parts of the USSR but to the west as well, to fund the expansion.

Ukraine became the target for the heaviest collectivization. The collectivization of farms was essentially the creation of communal farms where multiple farmers would work together to produce a larger crop yield, as opposed to smaller farms producing smaller yields. As one can imagine, most Ukrainian farmers were not happy about, or interested in, the proposition of collectivization, and many were fiercely opposed to it.

In a backlash to the soaring unpopular opinion of Ukrainian collectivization, Stalin launched a massive propaganda campaign labeling those farmers against collectivization as “kulak,” a Russian word meaning a peasant of wealth. These “kulaks” were portrayed by Stalin as being greedy, and vile, along with harboring anti-soviet feelings. Those who were labeled as “kulaks” would have their homes searched by Soviet police who would confiscate any grain found to be hidden in the home. Those deemed to be “kulaks” were also subject to arrest, imprisonment, exile, or even execution. Death was the fate of hundreds of thousands of Stalin’s “kulaks.”

For those who survived the “kulak” purges, grain production quotas soared so high as to verge on the impossible. When production requirements were not met, those responsible in the eyes of the Soviets had their homes searched, and unlike their first searches of the Soviet police, not only was any grain found taken but anything edible at all, including livestock and even pets. A vicious cycle had been created whereby farmers were forced to cultivate an impossibly high amount of product, and if they failed, which was inevitable, they would be stripped of anything they could eat.

Ukrainians became so hungry that anything they found would be eaten. Rotten horse flesh, insects, leaves, bark, and grass. Those who lived near water or forests had a saving grace in the form of mice and forest rodents, as well as tree fruits and ground vegetation; those near rivers were able to fish and gather frogs and river bank vegetation. Ukrainian houses that were discovered by the Soviet police to be in the possession of grain or any other edible subsistence faced charges as serious as ten years in the gulag, or even execution.

Individuals, families, and even entire villages could be blacklisted, whereby they were completely unable to procure any type of sustenance at all. There were a select few who could earn a government stipend, but even those deemed worthy could hardly purchase an adequate amount of food for their families.

Many Ukrainians’ attempted to escape the country and make it to larger cities where the effects of the famine had not hit as hard. However, it didn’t take long for Stalin to catch on to the escape routes, which led to the complete closing of Ukrainian borders. Those caught escaping were either dragged back to their villages to die of starvation, or shot.

It wasn’t until the population of Ukraine became so depleted that Stalin began pulling back his efforts to starve out the country. Stalin began sending Russian peasant families to farm the Ukrainian land, however, quotas became lighter and more realistic. It was then that the horrors of the famine began to lift, as more and more farms fell to collectivization, and larger and larger portions of Ukrainian land came under Soviet control.

Stalin and the Soviet Union went to extreme lengths to cover up what really happened in Ukraine. “Food Shortage” was often the common answer to the question of what took place. Death certificates were altered so that “starvation” never appeared as the cause of death. Even the 197 census, which showed a major decrease in population was made public. And those responsible for its recordings were killed.

It was not until Gorbachov’s glasnost policy that the USSR even made a public reference to the Ukrainian famine, or made it legal for others to do so. However, neither the Soviet Union nor the present-day Russian state has ever acknowledged their role as the instigators of the Holodomor, but history remembers, and the true story of the horrors that took place on Ukrainian soil, and who caused them, must never be forgotten nor allowed to repeat.

Applebaum has written a book that illuminates the political motivations for the horrors of the Holodomor in Ukraine, but she also doesn’t lack the human interest factor. Going from the opulent offices of Soviet officials, to the squalor and terror of the Ukrainian villages, a complete narrative, both one based on policies, and people, is presented to the reader.