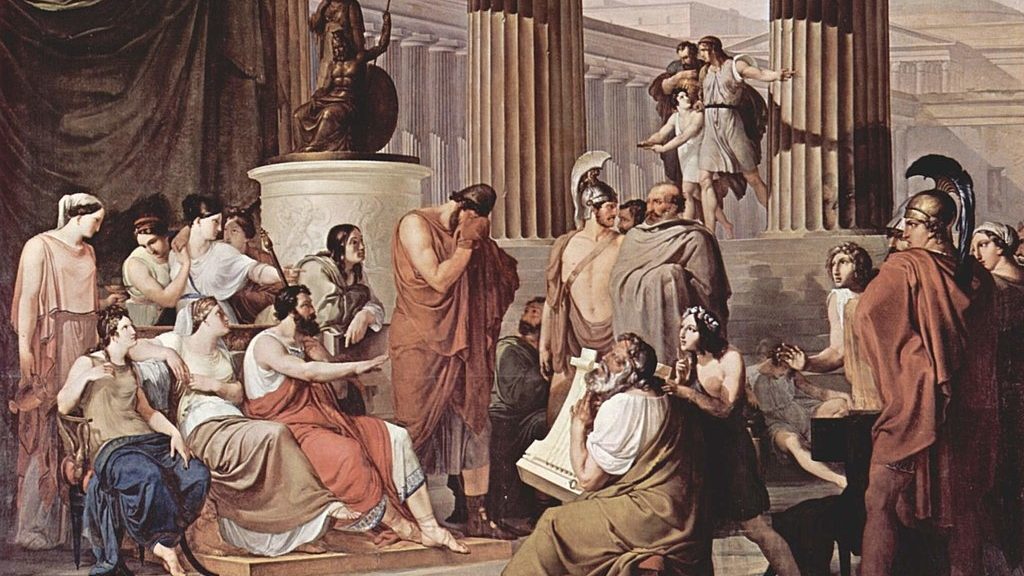 Throughout Homer’s The Odyssey there are many running themes, one of the most prevalent being hospitality. Hospitality, or the ancient greek rule of Xenia, or “guest-friendship,” was one familiar to the original audience of The Odyssey. The idea of “guest-friendship” or Xenia is fairly straightforward. The ancient Greeks believed (as did many other ancient cultures) that the gods came down to the land of the mortals disguised as travelers in need of a place to stay, to test the hospitality and generosity of men. If the gods were well received in their human form, and treated well, the mortal would receive blessing and be in the favor of the gods. But if the god or goddess did not like the way he or she was received, the mortal would be cursed and pushed away from the god’s affections. So at its core the idea of Xenia is the thought that anytime someone showed up at the door of someone’s home, they would be let in, and treated like the possible deity they were. There are many instances in The Odyssey demonstrating hospitality, but I am going to slim it down, and focus on two examples that I feel best express the theme: Athena’s treatment in the home of Telemachus, which shows the proper way that one is meant to treat a stranger, and the second is the suitors who plagued Odysseus’ home, and who illuminate perfectly the ways in which hospitality is abused through the story of The Odyssey.

One of the first scenes in which the reader is met with a character’s hospitality is when the goddess Athena appears to Telemachus, the only son of Odysseus, in the form of a man named Mentes who was a long time friend of Odysseus.

“Daydreaming so as he sat among the suitors, he glimpsed Athena now and straight to the porch he went, mortified that a guest might still be standing at the doors. Pausing beside her there, he clasped her right hand and relieving her at once of her long bronze spear, met her with winged words: “Greetings, stranger! Here in our house you’ll find a royal welcome. Have supper first, then tell us what you need.” (Page 81, lines 38 – 46.)

This section shows perfectly the way in which a guest was supposed to be treated upon arrival at someone’s house. They were to be welcomed and shown inside, given a meal, perhaps a bath as well as fresh robes, and then afterwards be asked who they were, where they were from, and so on. Asking someone of their status or name prior to offering them a meal or lodging was seen as giving favoritism to more well to do travelers rather than an equal treatment to all.

The second example is one that shows perfectly the fact that people could and did indeed take advantage of and abuse the generosity and hospitality of guests. One of the first conflicts to arise in the book is the problem of the suitors who have permanently moved into the house of Odysseus and Telemachus, who have made it their goal to woo the heart of Penelope because everyone is sure that Odysseus has indeed been killed in the streets of Troy. The suitors give a wonderful example of the abuse of hospitality.

“There she found the swaggering suitors, just then amusing themselves with rolling dice before doors, lounging on hides of oxen they had killed themselves. While heralds and brisk attendants bustled round them, some at mixing-bowls, mulling wine and water, others wiping the tables down with sopping sponges.” (Page 81, lines 124, 131.)

“Dear stranger, would you be shocked by what I say? Look at them over there, Not a care in the world, just lyers and tunes! It’s easy for them, all right, they feed on another’s goods and go scot-free, a man whose white bones lie strewn in the rain somewhere, rotting away on land or rolling down the ocean salty swells. But that man – if they caught sight of him home in Ithaca, by god they’d pray to be faster on their feet than richer in bars of gold and heavy robes.” (Page 82, lines 184 – 192.)

The suitors remain in Odysseus’ house for the remainder of the story, until the last few books of The Odyssey when Odysseus returns to find his home overrun with men after his own beloved wife, whom he then defeats. The story closes with a scene of the god Herems leading the souls of the suitors to the underworld. This ending is one that would have been shocking to many of the original listeners of Homer’s epic. The idea of forcing a guest to leave, even one that abuses your generosity, was a thought as foreign to many in the time of Homer as the idea of Monotheism.

Hospitality is by far one of the most prominent themes in Homer’s The Odyssey. The instances in which this lavish hospitality is shown give us in the twenty-first century a way to peer into the everyday cultures and traditions in ancient Greece, surrounding both the ideas of hospitality and generosity toward strangers.